The oTherm framework consists of a backend web application written in Python (Django platform) with two databases (SQL and Time Series) that is ‘containerized’ using Docker for efficient deployment. The front end and APIs supports efficient data entry and retrieval. 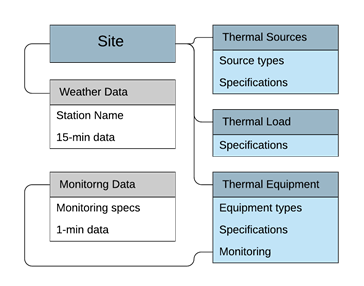 The static data is stored in a PostgreSQL database and the tables can be split into two general groups. The first group of tables are those that likely contain new and site-specific information. The second group of tables contain information that can likely be utilized by multiple sites. For example, a monitoring system may be defined once and then an instance of that monitoring system may be deployed at multiple sites. Tables with site data can be configured to be accessible to oTherm users while tables that can be used between sites can be restricted to those with administrative privileges. The SQL data model specification provides a detailed description of the SQL tables and fields.

The relationships between the tables is summarized in SchemaSpy images in both compact and the large formats.

While we often associate the term ‘measurement’ with a single instance. In the context of time series data, a measurement is a collection of tags, fields, and timestamps. 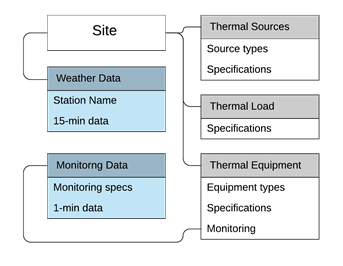 In some cases, it may be necessary to upload time series data into the database. This can be done using text files with data in a ‘line protocol’ format. Each line represents a collection of (1) measurement name, (2) tag key:value pair, (3) a set of field key:value pairs, and (4) a time stamp in epoch time Single spaces delimit each of these elements.
Key value pairs in a field set are delimited by commas. It is important that spaces are not included after commas. A sample Python Script for creating line-protocol files is provided in the oTherm GSHP analytics repository

oTherm looks to build upon ongoing efforts to develop data standards and data repositories related to building energy usage with renewable thermal systems installed in buildings. There are two Department of Energy supported data standards that are particularly relevant to oTherm.

The data elements of the facility level data model are mapped onto the Building Energy Data Exchange Specification (BEDES) to facilitate the integration of oTherm with other building energy applications. The BEDES dictionary is organized into data terms that each have a data types that include Decimal, Integer, String, TimeStamp, and Constrained Lists.
These individual (atomic) terms can also be combined into Composite Terms to provide additional context. For example, the term to describe the area of a building that receives space conditioning (conditioned_area) can be defined by combining two atomic BEDES terms (Conditioned Status = “Conditioned” and Area = [value]) with units of square feet.
The creation of composite terms can be subjective and for some terms that were not originally envisioned in BEDES, the mapping can become cumbersome and the benefit of mapping becomes questionable. This is true for many of the oTherm terms that describe specific characteristics of a ground loop heat exchanger. oTherm mapping to BEDES

The National Geotherm Data System enables compilation of a diverse set of data products over a wide range of geothermal applications. Here, the oTherm data model fields have been mapped on the NGDS Heat Pump Facility model. In general, the NGDS Heat Pump Facility model places more emphasis on the characteristics of the subsurface and the ground heat exchanger.
oTherm mapping to NGDS